Henry Engineering DigiMatch is “the Digital Matchbox”. Not only does it convert between consumer (SPDIF) and professional (AES/EBU) digital formats, but it’s also a digital distribution amplifier that gives you 6 digital outputs! Use DigiMatch 2X6 to feed your digital audio into several CD or DAT recorders, or into multiple console inputs. Never use “Y-cord” to split digital signals; use DigiMatch 2X6 to maintain proper digital levels and data integrity.

Modes are selected using front panel switches. The “Convert” mode is essentially a “digital MatchBox,” providing bi-directional conversion between AES/EBU and SPDIF digital circuits, without altering any data in the bitstream.

DigiMatch circuitry automatically corrects input levels that are out of tolerance. All 6 DigiMatch outputs can be used simultaneously and without interaction. The AES/EBU inputs and outputs are transformer isolated. All outputs are short-circuit protected and can drive long lines without signal degradation.

DigiMatch is 1/3 rack width and can be mounted in an optional rack shelf, or wall-mounted using optional wall/cabinet mounting brackets. DigiMatch is powered by an internal AC power supply. 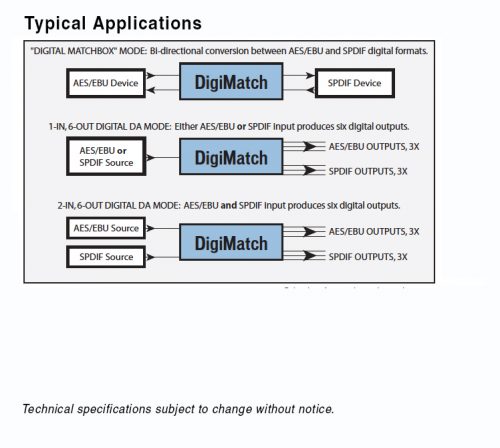